How Much Did Generics Save You and Your State in 2016? | Association for Accessible Medicines
Skip to main navigation
In the News - View AAM CEO Dan Leonard's blog on the essential role generic drugs play during COVID-19
Learn More
Close

How Much Did Generics Save You and Your State in 2016?

Michelle, a retired university librarian, is making the most of her golden years, taking vacations whenever she can. Saving money on her prescription drugs helps to put these adventures within reach for her.

“I have a very good relationship with my pharmacist,” she explains. “He said, ‘Don’t waste your money on the brand names.’ I’m on a fixed income, and those savings really do add up.”

Michelle lives in Pennsylvania, a state that altogether saved $11.6 billion in 2016 through generic drugs, according to the recently released ninth annual Generic Drug Access and Savings in the U.S. report.

To find out how much generics saved your state, explore the interactive U.S. map. 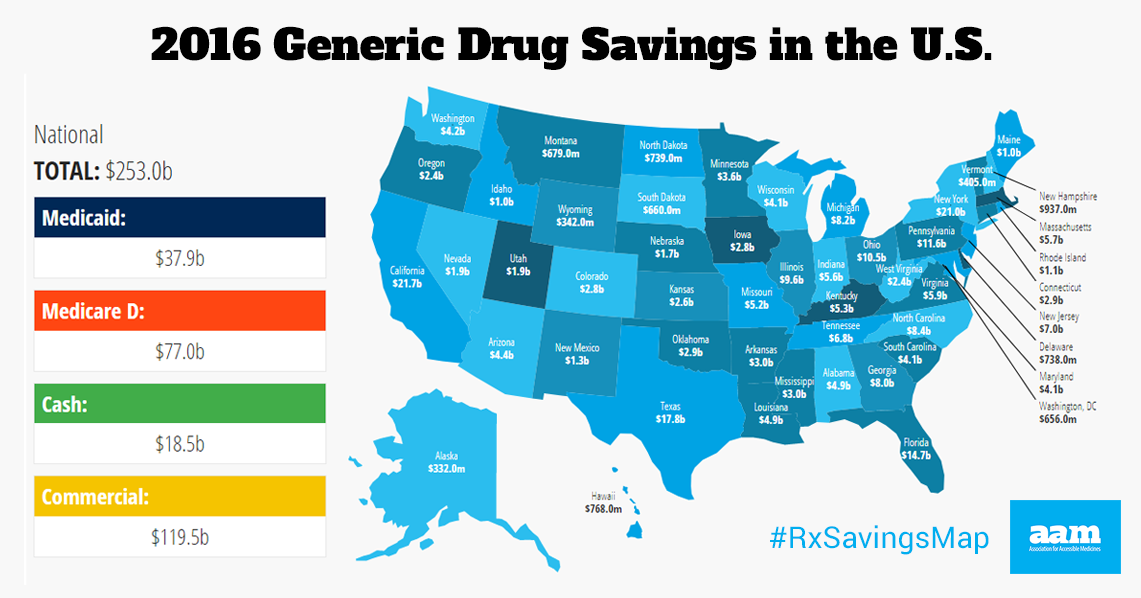 These savings make a difference to people like Michelle—and to all taxpayers. Health expenditures climbed 5.8% to $3.2 trillion in 2015 (the most recent figure available, according to the government’s Centers for Medicare and Medicaid Services), or $9,990 per person, accounting for 17.8% of Gross Domestic Product. And the Center for Medicare and Medicaid Services (CMS) estimates that prescription drug spending will grow an average of 6.3% per year through 2025, almost exclusively due to the increased spending in high cost brand products.

“We could see even greater cost savings if we helped more safe and effective generic drugs get to market sooner, after patent and statutory exclusivity periods have lapsed, by addressing some of the scientific and regulatory obstacles to generic competition across the full range of FDA-approved drugs.”

Dr. Gottlieb’s Drug Competition Action Plan is a step in the right direction.

The report’s state-specific information is invaluable for making informed decisions about how to protect consumers from rising drug costs. Some state governments have begun to address this issue without sufficient appreciation of the difference between generics and brand-name drugs. As a result, they have targeted deflationary generics rather than inflationary brands.

Unintended consequences of state legislation threaten to undermine the very savings they are supposedly protecting. That’s why AAM publishes this report and collaborates with a broad range of stakeholders to ensure and expand access to generics and biosimilars.