As Congress discusses ways to address high brand-name drug prices, there has been a focus on lowering drug prices through “negotiation” with Medicare. Unfortunately, the policy under consideration as part of the House-passed Build Back Better Act would undermine generic and biosimilar competition by entrenching monopolies and thwarting competition. The end result would be lower savings for patients, employers and taxpayers.

Instead of the untested approach proposed in the Build Back Better Act, there are a number of steps Congress can take to reduce drug costs by increasing seniors’ access to generic and biosimilar medicines. These steps would produce more impactful and immediate results in lowering the cost of prescription drugs for patients today and for years to come. AAM estimates seniors could save as much as $74 billion over the next ten years, with additional savings for taxpayers and the federal government of $67 billion. We’ve highlighted a few of these steps below: 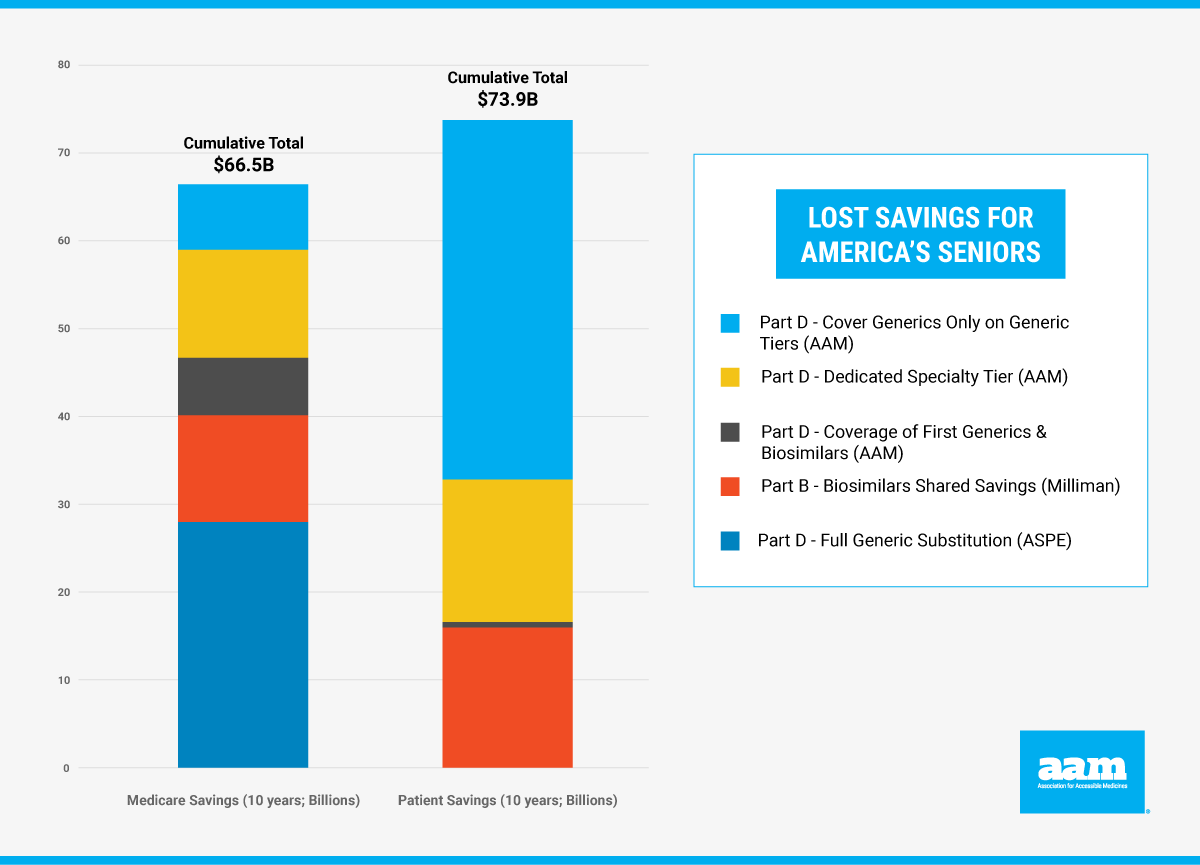 In recent years, plans have increasingly moved generic drugs from low-cost generic tiers to formulary tiers with higher copays even as generic prices continued to decline. This year, Part D plans placed generics on non-generic tiers more than 57% of the time. This is the third year in a row that most generics have been placed on non-generic tiers, and it forces seniors to pay more for their generic drugs – often even bearing the full cost of their generic. During the SFC hearing, Senator James Lankford (R-OK) highlighted this challenge, which is directly responsible for as much as $4 billion per year in unnecessary out-of-pocket costs for seniors.

Address the Use of Rebates and Part D Policies that Discourage Use of New Generics and Biosimilars.

Not only are seniors paying higher out of pocket costs for their generic medicines, they also are being denied access to many new generics to high-cost brand drugs. In fact, it takes as much as three years for new generics to even be covered by 50% of Medicare plans and thus be available for patients – a much slower coverage rate than in commercial health plans. Congress can save billions for Medicare and taxpayers by (1) redesigning the Part D program to increase plan liability to encourage greater adoption of lower-cost generics and biosimilars, and (2) ensuring coverage of new generics when they are lower priced than the brand. In fact, increased use of lower-priced first generics would save the Medicare program $7.5 billion and its beneficiaries $3.6 billion over ten years.

Congress can also direct the Center for Medicare and Medicaid Innovation to create a demonstration program to encourage biosimilar adoption by rewarding providers and patients for use of a lower-cost biosimilar, as provided by the bi-partisan Increasing Access to Biosimilars Act (S. 1427) introduced by Sens. John Cornyn (R-TX) and Michael Bennet (D-CO). The creation of a biosimilars shared savings program would leave the choice of medicines in a physician’s hands while allowing them and their patients to retain a portion of the savings from use of the lower cost biosimilar. If implemented, the Medicare program will save up to $12 billion and patients up to $43 billion over ten years.

During the hearing, Senator Cornyn emphasized the need to “beat back some of the gamesmanship when it comes to the patent system.” This gamesmanship includes brand-name manufacturers amassing a wide variety of overlapping patents—more than 100 on biologics like Humira—to make it as difficult as possible for biosimilars to challenge those patents and bring lower-cost alternatives to patients as quickly as possible. As Senator Cornyn recognized, bills like the Affordable Prescriptions for Patients Act (S. 1435) would help address these abuses by limiting the number of patents that brand-name companies like AbbVie can assert in patent litigation. Additionally, strengthening the inter partes review system—as the Restoring the America Invents Act (S. 2891) proposes to do—would help lower drug prices by ensuring that issued patents reflect true innovation.

High brand-name drug prices, combined with an increasing trend of anti-competitive tactics like patent thicketing and rebate traps that delay or prevent competition, are pushing access to generic and biosimilar medicines out of reach for too many patients. America’s patients rightfully expect Congress to address the ever-increasing prices of brand-name prescription drugs. But it’s important that Congress pursue the right policies. Rather than untested and flawed approaches that could harm development of lower-cost competition, Congress should act on these simple approaches to provide billions of dollars in savings for seniors and taxpayers alike.