Despite Enrollment In Medicare Prescription Drug Coverage, Over Half of All Seniors Pay Full Cost for Many Generic Drugs

When seniors with Medicare drug coverage are paying the full cost for their generic seizure or asthma medications, it’s concerning. When the share of patients who have paid the full cost for certain generic drugs increases by nearly 20 percentage points over three years, it’s alarming. And when the price that patients with insurance are paying is higher than the price charged by generic manufacturers, it’s a clear sign that something is broken in the Medicare drug program.

In an update to a previous analysis, Avalere found that 63% of Medicare Part D beneficiaries paid the full cost of a generic at least once. This percentage has increased significantly since 2017, when 45% of patients paid full cost for these drugs.

When examining CMS Part D data from 2020, the researchers identified instances in which generic drugs appeared on preferred-brand tiers. Using the Part D negotiated price, which represents the amount the plan sponsors will pay the pharmacy, the researchers determined how many patients paid the full cost of a generic drug at least once during the initial coverage phase of their benefit. 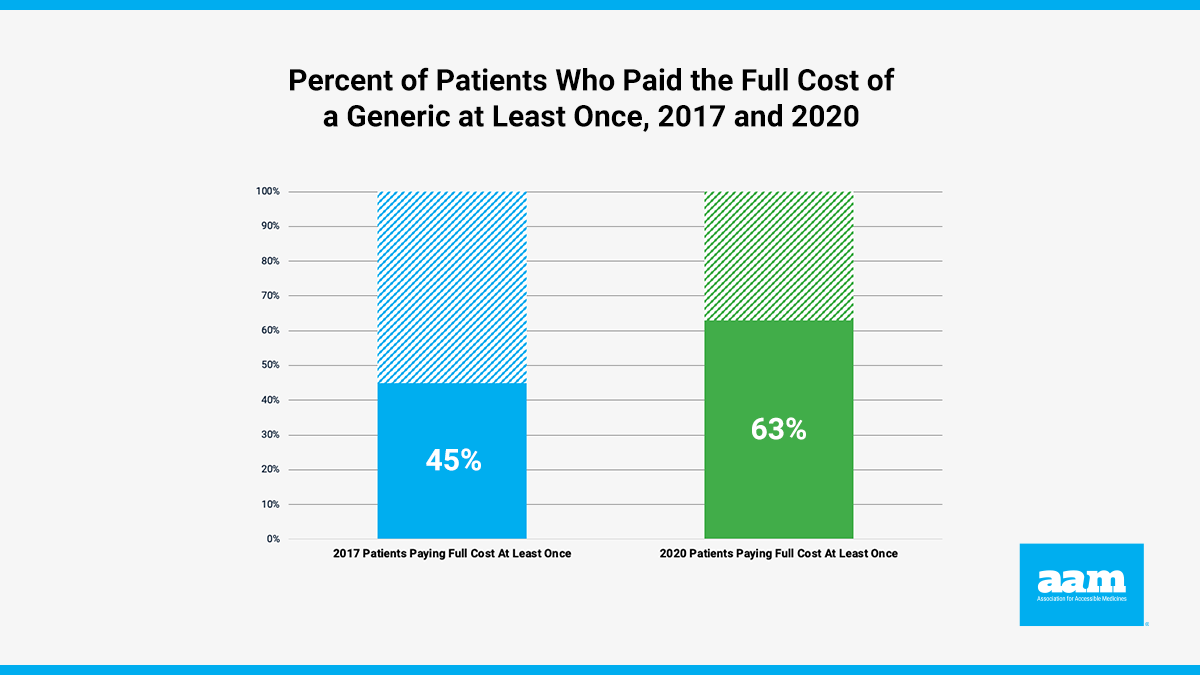 While the overall share of patients that paid the full cost of a generic product at least once was well over 60%, higher proportions were identified within key classes of drugs such as thyroid agents (95%), cardiotonics (89%), and antianxiety agents (86%).

This trend of more patients paying the full cost of their generic prescriptions is driven by PBM and plan decisions to place generics on formulary tiers with higher copayments. And it occurs even when the cost of the generic is falling. But it gets worse. Based on a separate AAM analysis, not only are patients paying the full price the pharmacy charges the insurance company for many generic drugs, but they are also often paying significantly more than the average manufacturer price (AMP) for the generic.

In other words, patients are paying monthly insurance premiums to a health plan and are then being charged a higher price than the manufacturer originally charged for certain generic drugs. For example, even though the manufacturer’s price is half of the negotiated price, 99% of patients taking montelukast sodium (generic Singulair), a drug used to control asthma, paid the full cost of their generic prescription during the initial coverage limit phase of their benefit. The negotiated price for this product was, on average, $31.04 and the weighted average AMP is $14.74, which means essentially all seniors paid twice the amount a manufacturers charges for their maintenance asthma medication.

These analyses provide yet more evidence of the harmful consequences as more Part D plans are shifting generics to higher formulary tiers in the Medicare Part D program. Rather than penalizing patients for using lower-cost generics, policymakers should reduce patient costs by ensuring that generic drugs are appropriately placed on generic tiers – so that patients receive the full value of using lower-cost generics.